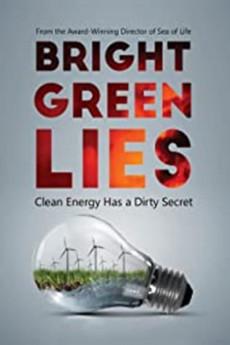 Documentary BRIGHT GREEN LIES dismantles the illusion of green technology in a bold and shocking expos챕, revealing the lies and fantastical thinking behind the notion that solar, wind, electric cars, or green consumerism will save the planet. Almost every major environmental organization is pushing for so-called renewable energy. Claims are being made about "green" technologies that are frankly untrue. Words like "clean", "free", "safe", and "sustainable" are often thrown around. But solar panels and wind turbines dont grow on trees. The mass production of these technologies requires increased mining, industrial manufacturing, habitat destruction, massive greenhouse gas emissions, and the creation of toxic waste. So-called renewable energy does not even deliver on its most basic promise of reducing fossil fuel consumption. On a global scale, the energy is stacked on top of what is already being used.